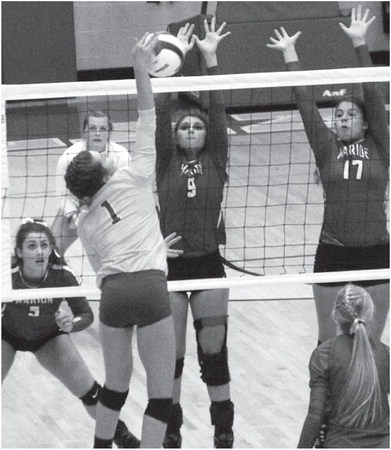 Sports Editor JONESBORO –Through nearly two sets in a much-anticipated conference match between defending Class 6A state champion Marion and defending Class 5A titleist Valley View, neither side had been able to find much separation.

The visiting Lady Pats had captured a wild first set, 26-24, before the second stanza moved into the late stages with the teams tied at 17-all.

That was when Marion senior Ally Bramucci hurt her ankle during a point and had to leave the game, and would not return.

The loss snapped a run of 14 consecutive wins overall and 15 straight conference wins for Marion.

“I thought we came out strong, I thought we had the momentum. I felt like the second set was going in our direction,” said Marion head coach Lisa Beasley following the match. “But, when you have your middle and your setter go down, it puts a kink into things.”

To say that Marion (3-1 overall and in the 6A/5AEast) came out strong would be an understatement. The Lady Pats scored the first eight points of the match, and looked as though they would continue a stretch of good play against Valley View that dated back to the teams meeting for one set on August 18 in a preseason jamboree.

Valley View would work its way back into the proceedings, getting within two points on two separate occasions before senior Sara Betts came up with a block at the net, followed by a kill ahead of a kill by senior Sarah Burford.

That ran the score to 1914 in favor of Marion, and Valley View called for time.

From there, the Lady Blazers would tie the set on three separate occasions, including one that evened the score at 24-all.

From there, Bramucci and junior Destiny King gave Marion a 25-24 lead with a block and a Bramucci kill off of a free ball gave Marion the initial set in a thrilling 26-24 victory.

The second set began the way that the first ended, as the schools were tied at 5 in the earlygoing.

That was when Marion hit Valley View with a run of six consecutive points for an 11-5 Lady Pat lead, that forced the Lady Blazers’ hand with a timeout.

Valley View rallied to tie the score at 17-all, when Bramucci went down during a rally. The senior was helped off of the court before returning to the bench area later in the match.

Amazingly, though just two points separated the schools until that point in time, Valley View scored 33 of the next 48 points to get the second set at 25-19 before rolling to the third stanza 25-13, putting the hosts one set away from a win.

“They’re just a close team. It’s just hard when you run a system and you have to make changes on the fly like that.”

Faced with that 2-1 deficit, and playing without one of their leading passers and blockers, the resilient Lady Pats set out to force a deciding set to 15 points in the fourth frame.

Marion was still looking to find its bearings early on in the fourth set as the Lady Pats never scored consecutive points until they fell behind 19-10 later in that stanza.

From there, Marion would get within four points twice and three points once before falling 25-20.

“I was encouraged by finishing the fourth set the way that we did,” Beasley said. “We just couldn’t get over the hump. I’m really proud of who we got to step up. Maggie (Aureli) did a good job, Destiny was in a new position, Lillian and Carly Russell played well. I was proud of all the heart and effort that they showed.”

Marion is back in action Thursday afternoon against Paragould in another conference contest. The 7thgrade contest will begin at 4:30 p.m.

Paragould is coached by Marion graduate Reed Fogleman, who is in her first season as head coach of the Lady Rams.