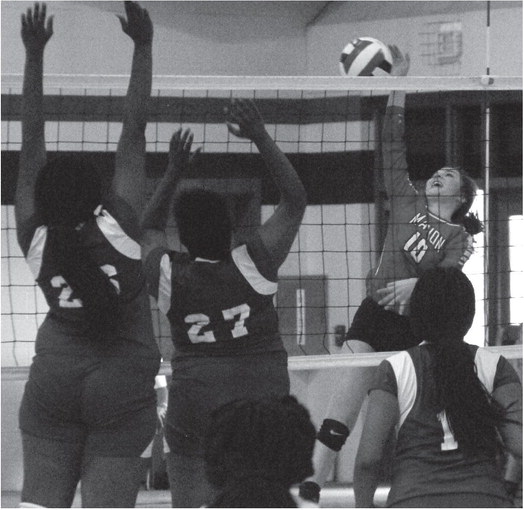 Marion started one of its two marathon weeks in a big way last night at Marion Middle School Gym.

Playing the first of three conference matches in a four-day span, Marion moved to 3-0 overall and in the 6A/5A-East with a straight-set victory (25-1, 25-0 and 25-6) against Forrest City.

The Lady Pats will turn their attention to tonight’s match in Jonesboro against the defending Class 5A state champion, Valley View.

“I’m really proud of how we executed tonight. No matter who I called on, they went in and did a good job for us, and that’s very important,” said Marion head coach Lisa Beasley.

Phipps would serve eight total in the match, good for second on the team.

Following a Forrest City point, Marion stole the serve back quickly and senior Ally Bramucci got hot from the stripe, serving six of her seven aces in the match to close the Lady Mustangs out as Marion finished by scoring the last 11 points of the set.

The second set was perhaps more impressive as junior Lillian Fogleman got the hot hand and served 14 of her team-high 20 aces in that second set shutout victory.

“Lil served excellent for us tonight,” Beasley said of her number 4. “I can’t ask for much more than that. I really thought everyone that touched the ball did a good job.”

The deciding set saw the visiting Lady Mustangs hang around in the early portions of the set. Marion led 7-4 when they put together the run that would eventually clinch them the win.

Fogleman served four more aces in that stretch, while senior Annalee Parker came up with a pair of kills, as did classmate Ally Bramucci and Marion suddenly led 18-4 to force a Forrest City timeout.

Bramucci and junior Destiny King would post alternating kills on the last four points to get Marion to 3-0 with that 25-6 win.

The much anticipated match against Valley View will be between what may be two of the favorites in the 6A/5A-East, though the two schools will compete in their respective state tournaments in October and not against one another.

In the junior varsity contest, Marion was also victorious as Thompson served a team-high 13 aces, while Fogleman chipped in with three of her own, and senior Maggie Aureli posted four kills, which was the teamhigh in that stat.

The Valley View match will begin with a 7th grade contest at 4:30 p.m.