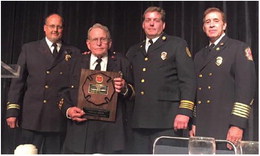 Irby honored for 60- plus years of service

ralphhardin@gmail.com The accolades poured in for local firefighters at the annual Arkansas State Fire Convention on July 9 in Hot Springs.

Among those honored was Earle Fire Chief Irby Campbell. Campbell was inducted into the Arkansas Firefighters Hall of Fame.

Chief Campbell was honored at the State Convention for his service of more than 60 years to the Earle Fire Department, including 55 as the city’s Fire Chief.

As Chief Campbell made his way to the stage, he was given a standing ovation by the conference audience.