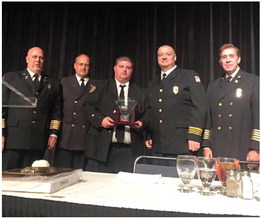 ralphhardin@gmail.com Crittenden County was well represented at the annual Arkansas State Fire Convention in Hot Springs, on July 9. “Crittenden County’s Bravest” showed out, receiving three of the top honors given each year at the state convention.

Fire Chief Jeff Jones, representing the district, accepted an award for their district in the Arkansas State Firefighter Association for Most Improved District.