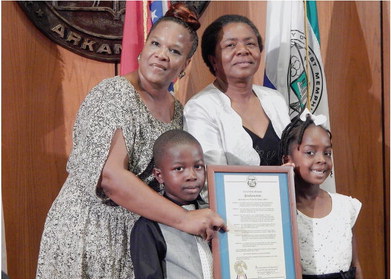 Seven-year-old Sydney Hopson smiles as she picked up heavy recognition during the West Memphis City Council Meeting Thursday. “The “ABC Girl” with local ties won the National Jackson Music Award for her age group by reciting KJV Bible passages that began with each letter of the alphabet. Sydney is flanked by her grandmother and brother. Councilwoman Melanie Hutchinson made the presentation.