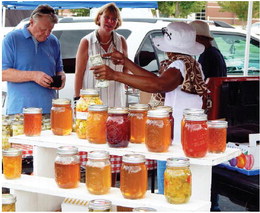 The Delta Market drew shoppers to the north campus at ASU-Mid South Tuesday despite the summertime swelter. A bunch of farmers trucked in their produce, from points all around. Tomatoes, and pickled everything from eggs to pickles and peppers, and honey rolled in from Ripley. Produce including squash, pecans and more tomatoes were trucked from Tyronza along with lemon grass for the tea drinkers. Produce from Proctor graced a ginghamcovered tablecloth under a pop up canopy.

Vendors and food trucks offered snacks and lunches. The menus ran the gambit from basic burgers, tacos, and salads to some trendy frou frou food. Pastry lovers had a wide variety to pick from a pair of bakers.

Cinnamon, orange and the smells of flavored frostings wafted through the market.

A fitness and nutrition consultant drummed up clients. Artist and artisan peddled their crafts and sketches. Woodworking, fancy flag poles, and homespun purses and jewelry were offered along the way. The sounds of KWEM, based at the college, surrounded the scene with the

sounds of Johnny Cash and some rockabilly as shoppers browsed on the parking lot lined with tented market booths.