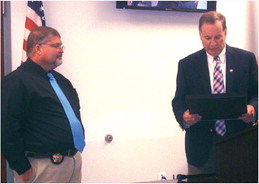 Crittenden County Sheriff’s Office has a new chief investigator and a new head of its 911 Center.

Grooms, an 11 year veteran with CCSO, replaces Zane Boyd who retired in June.

Allen said Grooms has already been busy investigating two homicides in Earle and has experience with big cases.

“Todd is going to do a really good job,” Allen said.

“He’s already hit the ground running with those Earle homicides and has been thrown into it real quick.”

Grooms was the Internal Affairs and Jail investigator for the last five years.

Allen said Grooms led the investigation which led to the arrest of several jailers at the county lockup who were caught smuggling contraband in to the jail. He also assisted Marion Police Department in solving its investigation of a Walmart manager who killed his wife.

“I’ve worked with a lot of investigators over the years and have trained investigators, so I know when I have a good one that is going to be a great one,” Allen said.

“He is very, very thorough.

He is top notch. I’m very

Allen said he needed a hidden camera system on one of its vehicles to assist in undercover operations and turned to Grooms.

“He made us an amazing system and installed it,” Allen said. “I call him MacGyver. He can pretty much fix anything electronic.”

Allen said Sturch has also made an immediate impact in his new role.

“He’s another one who hit the ground running,” Allen said. “He comes in to my office every day with ideas and he is way above my expectations of his abilities.”

Sturch was an arson inspector for West Memphis Fire Department for 11 years before changing careers to go in to construction and real estate.

He represented District 12 for six years on the Quorum

Allen said Sturch will be visiting the Craighead County 911 Dispatch Center in Jonesboro soon to observe how it operates and to bring back ideas on how to improve the one in Crittenden County.

“I don’t think it is going to take long for him before we have a state-of-the-art 911 center,” Allen said. “I think we will see some massive upgrades under Ronnie. He is going to be a top notch manager in that position.”