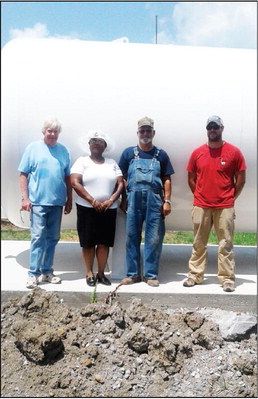 Mayor: ‘ This is huge for the community’

Residents of Turrell won’t have to worry about having to boil their water the next time the city’s well shuts down.

The city received a brand new 10,000 gallon hydropneumatic water tank and a generator which will serve as a back-up to the city’s main well to ensure that it doesn’t go out again.

“This is huge for the community,” said Mayor Dorothy Cooper. “I am very happy for the community because that water has been shutting down before I came in to office for like four or five years. So for this to come along is outstanding. I am just so proud and grateful.”

Last May, the generator powering the city’s main water pump broke down due to an electrical problem and residents were placed on a boil order.

The city received a $201,500 combination grant and loan from Arkansas Natural Resources Council to get a new hydro-pneumatic tank.

Turrell will be responsible for paying back $50,000 of the cost.

The tank holds 5,000 gallons and will provide water to residents in the event the pump shuts down. The tank holds water and air pres- sure which regulates the system to quickly meet water demands.

The back up generator attached to the tank will help keep the city supplied in the event of a shut down.

“The whole ordeal started when the generator went out,” Cooper said. “It just shuts down the whole town when it happens. The generator that came with this is the back up in case the main one shuts off. It will kick in and start it right back up.”

Cooper said the concrete slab is done and the tank is in place. Contractors still have to connect the system to the generator.

“The only thing left is the connection of them both,” Cooper said. “They will be back out next week to complete

The tank was installed by Bentco, Inc.

While the new tank is a welcome addition to a long standing problem, Cooper said the city still has water issues it needs to address.

The city needs a new water tank and funds to replace the entire water system. The city’s sewer pond is also badly in need of attention.

“The piping here is so old,” Cooper said. “But at least this got us off the critical list with the Arkansas

Health Department. I shouldn’t have any more boil orders. And I don’t want any.”