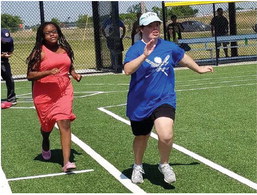 Special athletes take the field for a little baseball action

The Miracle League held a successful roundup at the Cal Ripken Sr. adaptive sports field at Tilden Rodgers Park in West Memphis on June 11. The West Memphis Mighty Miracles rejuvenated under the volunteer efforts of Paul Johnson, special needs athletes played some T-ball and enjoyed a cookout and snow cones.

“It went well,” said Parks Commission Chairman Darin McCollum, “We had 15 players. There were 150 people out there.”

Players brought an entourage. Each player has an on field assistant. Johnson dressed up in umpire regalia and friends and families cheered the players decked out in blue and white team T-shirts. A lot of backers made the event possible and McCollum spread around the thanks for the freebies.

“Save-A-Lot donated hotdogs and everybody had popcorn on the Boys Club,” said McCollum, “the parks commission paid for snow cones for everybody in attendance.”

The summer swelter cut the time planned for the vent short but good times were had by all.

“We were planning on three innings but we only played two,” said McCollum, “every kid got to bat twice.”

The roundup worked as planned.

“We had enough interest to have a team by fall,” said McCollum.