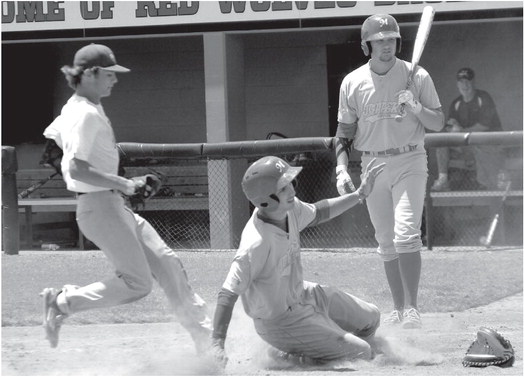 Playing at Kell Field on the campus of Arkansas State University, the local showcase outfit rode a fourrun rally to a 7-3 win against the Mississippi Royals blue team in the first game of the day before the Toppers rallied to drop Batter’s Box 10-0 to move to 15-2-1 overall this summer, as well as extending a 12-game unbeaten streak.

Marion’s last loss was on June 7 against the Ponotoc Red Sox at USA Stadium in Millington.

The Toppers are in the midst of their best stretch of offensive baseball of the summer. Dating back to a doubleheader sweep of Memphis Homeschool Academy last Monday at home, Marion has scored double-digit runs four times in the past week.

“I’m really proud of how we’re swinging the bats here lately,” said Toppers head coach Junior Weaver. “On top of that, the team chemistry has been getting better all the time. Guys are talking and getting along. They seem to be buying into our system here. It’s been a good run lately.”

That good run started with a good inning in the Saturday opener against the Royals. Marion scored twice in the first inning, when Gavin Stone reached on a hit-by-pitch, and scored on a Cam Smith triple. Smith would come around on a Blake Daniels single for a 2-0 lead.

That outburst supported Marion starter Larkey Dotson. Dotson retired the first eight Royals that he faced, and did not allow a hit until the fourth inning.

However, while Dotson silenced the Royals bats, the Toppers also had trouble restarting the motor following that two-run rally and the 2-0 lead held until the top of the fourth inning, when Mississippi picked up an unearned run to cut the lead in half.

The Royals tied the game in the fifth before the Toppers reclaimed the lead at 3-2 when Kollin Stone singled and scored on a Daniels groundout.

In the top of the sixth, Mississippi tied the game again, tallying its third run off of Dotson, the eventual winning pitcher.

The eventual Marion rally started with a Nolan Smith double off of the right-center field wall leading off the bottom of the sixth.

A Bryce Logan single set the Toppers up with runners on first-and-third and just one out and Nolan Smith scored on a Nick Alsbrook single, which would double as the game’s eventual game-winning run. It was Alsbrook’s third game-winning RBI of the summer.

A Gavin Stone double chased in Logan and McElroy to cap the scoring. Kollin Stone came in and escaped a bases-loaded jam in the top of the seventh to pick up his fourth save of 2016.

“That was a good-hitting team over there. They knew what they were doing with the bats,” Weaver explained. “Larkey pitched pretty well, but didn’t miss a lot of barrels, but you have to give them some credit for that too.”

That scoring outburst made a winner of righthanded starter Kris Peet, who is now 4-0 in 2016, with an ERA under 2 in three starts.

Shortstop Gavin Stone jump-started the scoring with a single and came around on a Cam Smith single. Stone was 4-for-4 against Batter’s Box, with a run scored, and an RBI, while Smith was 2-for-4 with a rune, a steal and 2 RBI.

Peet allowed three hits against Batter’s Box, struck seven hitters out and surrendered just one walk in his five innings of work.

Gavin Stone singled to chase in Nick Alsbrook for a 5-0 lead in the fourth inning and the Toppers took off on a one-out rally to end the game in the fifth.

Daniels reached on an error and Heath Stephenson singled to score Daniels for a 6-0 lead. Evin Cooper singled and Alsbrook scored Stephenson with a hit and Trent Johns chased in Cooper and Alsbrook with a single of his own.

Johns would score the final run of the game when Smith scored him with a hit to trigger the run rule.

Marion is off today and will play the Jonesboro Ricemen at John Robbins Field on Tuesday night at 5:30 p.m. That doubleheader will be a seven-inning and a five-inning affair.