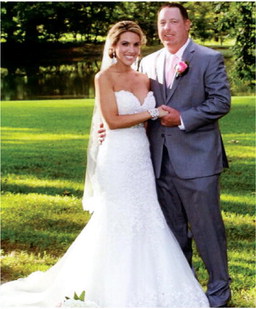 Stacy Nicole Creekmore and Casey Lane Minga were married on August 15, 2015 at 6:30 the Four Seasons’ Garden at Heartwood Hall In Piperton, near Rossville, Tennessee. The Reverend Russell Gallimore of Jackson, Tennessee, officiated.

The groom is the son of Harold “Pete” Minga of Olive Branch, Mississippi and the late Lynda Minga.

His grandparents are the late Dothan ‘Doc’ and Helen Minga of Glen Allen, Mississippi and the late Stephen Manning and Ophelia Hobbs of Memphis.

Escorted by her father, the bride wore a gown by Mori Lee. It was a mermaid style gown of alencon lace with embroidered appliqués and edging with crystal beading on tulle. It had a sweetheart neckline.

The scalloped hemline cascaded into a train. Delicate illusion lace covered buttons were down the back of the gown. The empire waist held a lace sash covered in pearls and rhinestones. The fingertip tulle veil was edged with lace.

She carried a hand-tied bouquet of pink roses and white hydrangeas.

Mrs. Heather Coburn of Arlington, Tennessee was the maid of honor. Mrs.

Jamie Stanford of Bartlett was the bridesmaid. They wore Adrianna Papel lace sheath dresses with cap sleeves and a ribbon belt in blush pink and carried hand-tied bouquets of pink roses.

Alyson Coburn, daughter of Mike and Heather Coburn was the flower girl. Ring bearer was Carson Togstad, son of Gene and Carlye Togstad of Eads, Tennessee.

A dinner and reception was held in The Barn at Heartwood Hall. Music was provided by the DJ, Scott Coggins, who also provided the wedding music.

The bride’s cake was a five tiered cake made and decorated by Karen Creekmore Brown of Brown Baguette and Bakery of Southaven. Each of the five layers was of a different flavor and decorated with white icing and edible lace and beads. The top layer had small pink edible flowers. The cake was topped with an “M”.

At the center of the candy favor table was a candy flower bouquet made of candy teeth. This was in recognition of the bride’s profession as a dental hygienist. It was made by friend of the bride, Mrs.

Robin (Blaine) Reeves of West Memphis, who also was responsible for decorations in The Barn. Mrs.

Shannon (Tim) Ginn, family friend, of Marion, arranged the flower bouquets consisting of calla lilies, hydrangeas, roses, pink aster, sweet William, Asiatic lilies and other flowers for the center of each of the tables, as well as the later flower arrangements, the bridesmaids’ and the brides bouquet.

A rehearsal dinner was held the night before at the Bonefish Grill in Collierville. The couple went on a honeymoon trip to French Polynesia islands of BoraBora, Tahiti and Moorea in the South Pacific.

They are now at home in Cordova, Tennessee.