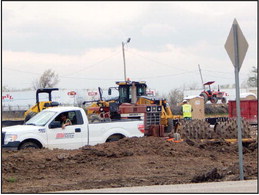 Sterigenics International has begun an expansion project at their West Memphis facility. The expansion to the north end of the building adds 62,573 square feet to the facility.

The estimated construction cost, according to the building permit, is $6.084 million, and Primus of Woodstock Georgia is the contractor.

The sides of the existing building fronting the highways will be updated to match the expansion. The steel-framed-and-sided facade will reveal a modern flare with expected completion in early next year.

“Our West Memphis location is experiencing increasing demand for sterilization services,” said MacNabb. “Given the im- portance of Memphis as a major logistics hub, it is a critical piece of our global network that we will continue to expand in order to best serve our customers.”

The new addition affords the space for the company to triple gamma sterilization capacity at the plant.

According to the company Sterigenics is a worldwide provider of Contract sterilization, gamma technologies and medical isotopes.

The West Memphis facility opened in 1999 with 2.5 million cubic feet of gamma sterilization capacity. The new installation increases that capacity to 7.5 million cubic feet. Running at full capacity, the company expects to add as many as 20 new local jobs.

“As the demand for medical devise grows globally, our customers can be assured that we will add sterilization capacity to meet