‘ One Hour with the Angel…’ 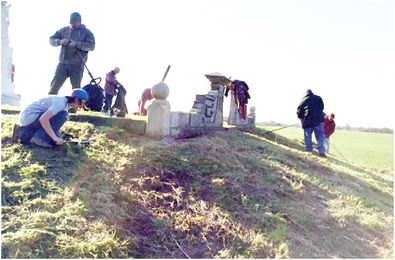 ‘ One Hour with the Angel…’

He was dismayed to see the famous “Angel in the Thorn Patch” overgrown and covered in weeds.

So when he was looking for a public service project for his congregation at Earle First Assembly to do he settled on cleaning up the memorial.

“I go by it all the time,” Adams, pastor of Earle First Assembly said. “It had been working on me probably for a year. It åneeded it.

Nobody that I am aware of is tasked with the responsibility of cleaning it. It is on private property. Other people over the years have done some things to clean it up. So I announced it to the congregation that that is what we were going to.”

Adams said about 15 volunteers joined him on Saturday to weed eat the grave site and clean it up.

“We called it ‘One Hour With the Angel,’” Adams said. “It took us about an hour and 15 minutes. We got rid of all the weeds. It looks completely different.”

The George Berry Washington memorial is located on Arkansas Highway 149 and inåcludes a monument of a five-foot female angel standing atop a marble base to mark the burial site.

Adams said the memorial is a national treasure and needs to be kept up.

“It is world famous because of Carroll Cloar,” Adams said. “And it is a great piece of history considering he was born a slave and then became Crittenden County’s most important land owner. We definitely need to keep it looking nice.”

George Berry Washington was a former slave who later became one of the largest landowners in Crittenden County.

According to the Encyclopedia of Arkansas History & Culture, George Berry Washington was born a slave in Kentucky and moved to Arkansas around 1833.

Washington and his family lived in an area where the Tyronza River meets Gibson Bayou which came to be known as the “Main Place.”

His plantation featured a one-story frame family home, a commissary store, a cotton gin, as well as numerous outbuildings and tenant houses. He employed about 100 other

farmhands to work his property.

Washington was also active in several local churches and served as pastor at St. Peter’s Baptist Church and at Spring Hill Church.

Washington died on the afternoon of August 30, 1928 from acute gastritis and was buried on Sept. 2, 1928 on a mount at the Main Place where the memorial stands today.

The front of the base features a Masonic symbol and the inscription “Rev.

I believe in the Son/I am Saved by the Blood of the Crucified One.”

His wife. Elizabeth Washington, continued to farm the land but lost it to the bank during the Great Depression when the family defaulted on a $28,000 loan in 1932.