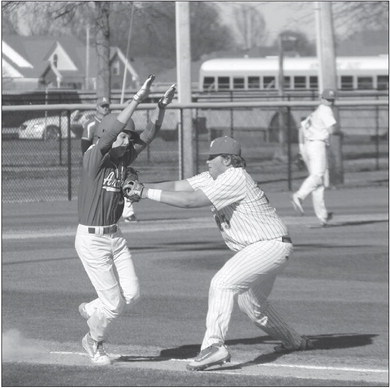 Sports Editor The Armorel Tigers have a strong reputation around the state of Arkansas of being competitive nearly every year, despite whatever losses they may have had from the previous season.

The defending Class 1A state champion brought their act to John Robbins Field yesterday and went home with an 8-2 win that dropped the Marion Patriots to 0-12 ahead of a 7A/6A-East doubleheader against Cabot on Thursday afternoon, also at John Robbins Field.

The Tigers have captured three state titles, all since 2006, and they've done so by following a simple formula that Marion head coach Daniel Kelley described following the contest.

'They play hard, play smart, and do what their coaches ask them,' said Kelley, the fourth-year Marion head coach.

While Armorel's approach to the game seems to be basic, the difference in their win against Marion came down to the Pats' old bugaboo: The big inning.

Armorel struck for five runs in the top of the fourth to bust open a tied 2-2 ballgame.

In that inning, Armorel sent nine batters to the plate, and took advantage of two Marion errors and three of Steele's four free passes to scrape across all five runs in that frame. The Tigers accounted for only two hits in that frame, though each did score a run.

Marion made four errors against Armorel, in addition to five walks combined by Steele and Collin Carpenter.

'We're just not where we need to be right now,' Kelley said after the game.

The defensive miscues and free passes overshadowed one of Marion's better offensive outings so far in 2016. The Pats finished with six hits against Armorel, while also coaxing seven walks of their own out of Tiger pitching.

Those factors helped Marion strike for a 2-1 lead in the bottom of the first. Marion's first five batters all reached base, with Heath Stephenson, Jackson Wiggins, Ben Vaughan and Peyton McElroy all striking singles.

Steele would follow Stephenson's hit with a walk and the righty starter would score on Vaughn's base hit from the cleanup spot. Wiggins would come in on the catcher McElroy's knock and the hosts led 2-0 after just five batters.

However, Armorel would turn a nifty double play to escape the jam with minimal damage.

From there, the Tigers would score the game's last seven runs after that 2-1 Marion advantage.

Armorel would get even in the top of the second, knotting the tally at 2-2 on a pair of hits, but Marion looked prime to steal the lead back in the home-half of that stanza.

Marion would load the bases in that inning, only to leave all three runners on thanks to a pop-out to third base and a strike out.

After two innings, Marion had already left four runners aboard.

However, the Marion defense made a bid to keep themselves in the game in the third inning.

Following a lead-off walk, Steele induced a hard grounder to shortstop Tony Rudd, who flipped to Cody Smith at second, who turned to Vaughn at first for a fleet double play to erase the lead-off baserunner.

On the batter following the double play, Armorel came up with a two-out hit, but McElroy threw him out trying to swipe second and after two-and-a-half innings, the game rested at 2-2.

However, Marion could never come up with a timely hit to get them over the top. Marion left at least one runner on base in every inning except for the fourth, totaling nine in all.

Armorel left six of their own aboard, but made them all count in that fourth inning.

The first two Tigers walked in that inning, and following a fielder's choice, Armorel's ninth batter came up with the eventual game-winning hit on a blistered shot to rightcenter field for a 4-2 lead.

Once the lineup turned back over, a pair of Marion fielding miscues cost the Pats three more runs.

The Tigers added their eighth run in the fifth inning on a walk that came around on a wild pitch that reached the backstop.

Carpenter pitched the game's final three innings, allowing just two hits, that unearned run, and walked one batter, while also striking one out. Vaughn was 2-3 for Marion with an RBI, while Wiggins was 1-3 with two runs scored.

First pitch of the Cabot doubleheader is scheduled for 4:30 p.m. at John Robbins Field, weather permitting.