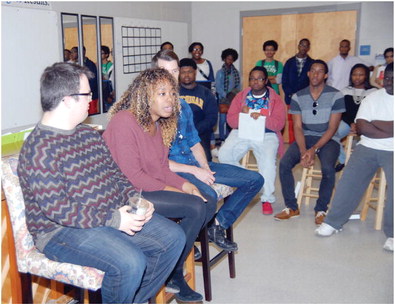 Academies of West Memphis alum Candace Quarrels made a glorious return to her alma mater Thursday as part of a Broadway Tour cast in The Book of Mormon.

Quarrels, a 2013 graduate of AWM, has the female lead in the production that has won 9 Tony Awards.

She and the rest of the 25member cast conclude their run at The Orpheum in Memphis on Sunday night.

“This has been like a dream for me,” said Quarrels. “I always wanted to be on Broadway and this is a start.”

Pawlakownski took time on Thursday to speak with choral students at AWM, along with a question and answer session.

As Quarrels pointed out to the students, she was in their shoes just a few short years ago.

Continued from Page 1 Doug Conwill told me to audition for opera camp,” Quarrels recalled. “I didn’t even know opera camp was a thing. Had he not walked into West Junior High’s women’s choir and told me I needed to audition… I wouldn’t have caught the bug.

“Opera camp was the thing that fueled my love for opera. I’d never been in a musical. For me, it was just choir… another thing to be involved in. I went to camp that summer and I was like, ‘Oh, my goodness I love this.'’ Quarrels plays the part of Nabalungi in The Book of Mormon and she has been on tour with the current cast for a year and four months.

“Being on tour is hectic,” she said with a laugh.

“Sometimes I’m not even sure what city I’m in or where we’re going next.”

Upon graduation from AWM, Quarrels enrolled at Belmont University in Nashville. In the middle of her sophomore year she answered an open call to audition for The Book of Mormon there in Nashville. The then-19-year-old Quarrels got the part and was immediately flown to New York to learn the show.

Her run with the production ends in January of 2017, she said, but “there will be negotiations.”

“I’ll either sign on for another year or something else,” Quarrels said.

Either way, she’s had the time of her life and her bond with the rest of the cast and crew is heavy.

“I’ve never felt more satisfied in my life than I feel with this gig,” Quarrels added. “And this week in Memphis I get a chance to show people what on earth I’ve been doing for the past year. You know, when people ask my parents ‘What’s Candace doing now?’ They’re like, ‘Oh, she’s in a musical.’ And they say, ‘well, that’ll be good experience for her.’ That’s pretty funny, but no, this is my job now.”

As Quarrels said, Conwill has played an integral role in her development as a performer.

“Doug has always been my biggest fan,” she said.

“We’ve had loads and loads of talented students come through West Memphis since I’ve been choral director,” said Conwill.

“We could see Candace was talented when she was a sophomore, but to see her called for a Broadway musical at age 19, well it’s a teacher’s dream come true.

I couldn’t be happier for her.”