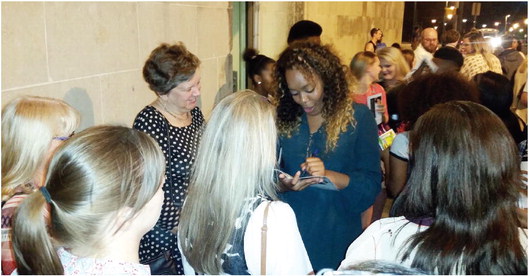 Candace Quarrels shines in ‘ Book of Mormon’ at Orpheum Memphis

ralphhardin@gmail.com Candace Quarrels, a Class of 2013 West Memphis High School graduate, returned home this week as a major part of the national touring production of Broadway hit, “The Book of Mormon.” The Tony Award-winning musical is playing the Orpheum Theatre through Sunday night.

“The Book of Mormon” has been described as a “subversive, profane and sometimes insightful musical about two Mormon missionaries in Africa,” and was co-created by Trey Parker and Matt Stone, creators of the TV show “South Park.”

The story follows two Mormon missionaries, Elder Price and Elder Cunnningham (played by Ryan Bondy and Cody Jamison Strand on the national tour), who go to Uganda to spread their faith to the poor. Quarrels is cast as Nabulungi, a young tribeswoman who dreams of going to a nonexistent, heaven-like version of Salt Lake City.

Quarrels does more than keep up with her more experienced cast mates, singing, dancing and delivering her lines with flair Reviewer Charles Runnels, who caught the show’s opening performance in Naples, Florida, last year called Quarrels’ “radiant” in her debut and gave the show a favorable review in the Naples News Press.

“It’s amazing what you can get away with when you say it with a smile and a catchy tune,” wrote Runnels, who opined, “Mormon certainly gets away with a lot.”

Candace, the daughter of Adolphus Quarrels and Wonder Junior High School principal Dr. Palmer Quarrels, had a bit of a “homecoming” performance when the show opened in Memphis Tuesday night, as several friends and family members were on hand for the show. She had special guests, former teachers from the Academies of West Memphis, waiting at the stage door to greet her after the performance and, yes, even sign a few autographs.

“Many thanks and all the love to my parents, my second family and all of my amazing teachers, family and friends who have supported me on this journey,” Quarrels noted in the Orpheum program, which also featured a special “Broadway Q& A” with the young star.

Asked her favorite thing about the role and the show, Quarrels said, Being able to share and perform such a fun, beautiful and charming show every night has truly been a dream. Underneath all the humor and the crassness of the story, there is so much truth an meaning. Naba had been a dream role of mine and I love getting to play a character who is so trusting and hopeful.”

“The Book of Mormon” is playing tonight at 8 p.m., with a pair of shows on Saturday (2 and 8 p.m.) before closing on Sunday with a 1 p.m. matinee and a final show at 6:30 p.m. Select tickets are still available for all of these shows at www.orpheum-memphis. com