Board of Corrections approves ACC move to West Memphis 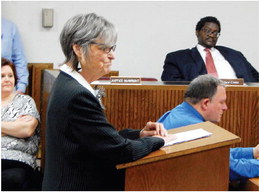 Board of Corrections approves ACC move to West Memphis

Transition could begin in as few as 60 days

Southeast Arkansas Community Corrections Center could move in to the former Crittenden Regional Hospital building as early as 60 days.

The county Quorum Court voted 8-1 this week to lease the building to the agency for a treatment center which will house 350 non-violent female offenders and bring 138 new jobs to West Memphis.

The state Board of Corrections, in a separate meeting, also voted to approve the move from Pine Bluff. All that remains is the approval of Gov. Asa Hutchinson.

“They said they could be in there in about 60 days,” said County Judge Woody Wheeless.

Pine Bluff officials had hoped to keep the facility in their city and started a petition drive to appeal to the governor.

“The Judge of Jefferson County called me yesterday to see how the vote came out,” Wheeless said. “When I told him he said ‘I knew you were going to vote to have them.’ They hate to see it go.”

The building has been empty since Aug. 2014 when the hospital closed and declared bankruptcy.

The county has spent over $1 million keeping the lights on in the hope of finding another use for it.

Despite a massive effort by Wheeless and the Quorum Court, no other hospital entity was interested in using the building and no other health care related business ever surfaced until ACC expressed an interest.

Residents voted on March 1 to redirect a one cent sales tax toward building a new hospital which will be operated by Baptist Memorial Health Care.

The lease will be for 10 years and ACC will assume all responsibility for maintenance and upkeep on the facility.

Wheeless said it is unclear yet whether ACC will need to get any further governmental approval to occupy the building, which would mean a hearing before West Memphis Planning and Development Committee and Design and Review Board.