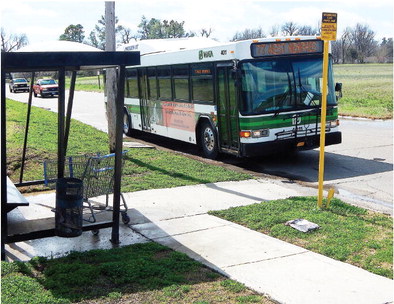 Routes consolidated, but no charge for students, commuters

Recent changes in Federal funding have forced bus service to alter routes and reduce the frequency of certain bus routes through West Memphis. The Job Access and Reverse Commute (JARC) funds that West Memphis used to provide free rides on the Memphis Area Transit Authority are gone. But while the JARC program discontinued and the funds dried up, the free rides continue.

Thanks to a year-long scramble by City Planner Paul Luker students at The Academies of West Memphis, commuters and local shoppers can still hop a bus ride for free.

“MATA was going to charge the city several hundred thousand dollars more to keep the bus service,” said Cook. “So, the city was forced to look for other sources of revenue and make changes to reduce the cost. Then in December, they changed the routes a little bit. They consolidated it.”

Cook observed MATA bus service had slowed down but it was still a free ride, according to AWM students.

“They have one route around the town and two buses making it where it used to be two or three individual routes,” said Cook. “They made that change in December. When we came back from Christmas break, our kids had to make a big change then because the bus may not have come close to the house any longer.”

“The whole thing revolves around the city of West Memphis,” said Cook. The cost has gone up. MATA says their buses are getting old and they have to get some new buses.”

“The school board did chip in this time, said Cook. “We’ll see how it works.”

Luker said the school board contributed $50,000 this fall that, along with route changes, helped preserve the free MATA rides in West Memphis. The city came up with other funds that MATA will put toward the purchase of a new green bus. The two funding streams along with the consolidated routes resulted in free rides despite the end of JARC. Luker had expressed hopes for just such a plan to keep a free bus in recent West Memphis Metropolitan Planning Organization (MPO) meetings.

“We’ve been talking about this in the MPO for sometime,” said Luker. “We have it all worked out for now.”

Resting on its laurels is not the posture the school district has taken given the bus changes.

“We bus students from out in the country and we have two buses for them from the east end of town,” said Cook. “We try and pick up some areas that MATA is not hitting. We are running a bus from where the majority of kids live. For instance, there is a bus that runs north of Broadway around East Junior High and out to the Park Plaza Apartments and brings them back this way. Our board is having discussions about running more routes around town.”