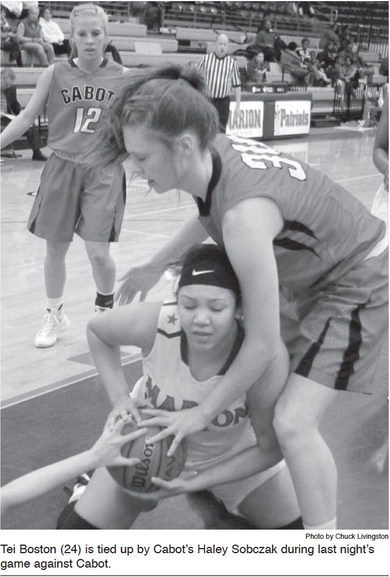 to take an ill-advised shot or turn it over.

Searcy turned it over 13 times, which was a high number considering the small number of possessions each team had.

By contrast, West Memphis turned it over 10 times, but the Blue Devils shot it well, hitting 13 of 25 field-goal attempts, including a 5-for-8 effort from three-point range.

'We know who our (threepoint) shooters are now,' Bray said. 'Before, we had everybody stepping up there and shooting threes.

We finally realized not everybody is a three-point shooter. We're getting more into our roles now.'

The best three-point shooter of late is senior Robert Harris, who hit 3 of his 5 treys and led his team with 11 points.

The offensive flow was held in check all night by Searcy's slow pace. It resulted in 12 West Memphis field-goal attempts in the first half and a 12-10 Blue Devil lead at halftime.

'There's not a whole lot we can do about it,' Bray said of Searcy's pace. 'All we can do is pressure them, but we can't overcommit because that leads to layups. We just have to keep our composure, and I thought we did a good job of that.'

Searcy hit only 4 of 18 shots in the first half and the Lions had to feel lucky they were only down two points at intermission.

But West Memphis hit Searcy with an 11-2 run to start the second half and by the end of the third quarter the hosts held a comfortable 30-15 lead.

A Harris layup and two free throws by sophomore Zachary Byrd, who scored 10 points off the bench, gave West Memphis its biggest lead of the night at 38-18 with 2:32 to play.

Bray has his team playing more controlled on offense and very soundly on defense. 'We're getting better,' Bray admitted. 'I thought we moved the ball around pretty good on offense. We still have a few guys doing things we've told them not to do, but I see progress.'

Tei Boston (24) is tied up by Cabot’s Haley Sobczak during last night’s game against Cabot.