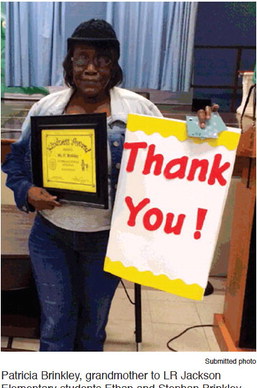 “We like to shine the spot light on our parents who are doing wonderful things on our campus,” said Sharmane Evans. “Each month a parent is nominated by their child’s teacher to be the parent of the month. This set of parents are actually mother/daughter and mother/grandmother to the children.”

Evans said the Brinkley ladies have been volunteering in Mrs. Jones classroom since school began.

“They come in each morning and afternoon,” she said. “They are extremely punctual when it comes to bringing their children to school as well as picking them up after school.

These parents provide snacks, party items, as well as school supplies for all of the students in their child’s classroom. They are very visible on our campus and we do appreciate their dedication and commitment.”

Stephanie Brinkley is the mother to Ethan Brinkley in Mrs. Jones’ classroom and Stephan Brinkley who is a first grader in Mrs.

Patricia Brinkley is the overly-dedicated grandmother to both students.

The Brinkleys received gift cards and certificates to Applebees as part of their recognition.

Patricia Brinkley, grandmother to LR Jackson Elementary students Ethan and Stephan Brinkley, shows off her certificate of recognition for being named, along with daughter Stephanie Brinkley, the school’s Parents of the Month for January.

Special to the Evening Times