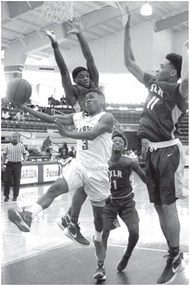 Sports Editor A mere 20 hours after losing a key 6A-East game to Jonesboro on Friday night, Marion was back in action on Saturday afternoon.

As luck would have it, they would be hosting a hot North Little Rock Lady Charging Wildcats team that had handed Little Rock Central its first loss.

North Little Rock never trailed in the game, and it was tied only once, at 3-3 early in the first quarter.

That stanza saw the bigger Lady Charging Wildcats go to work on the offensive glass. North Little Rock outboarded Marion 8-4 in the third, but five of those caroms came following a Lady ‘Cats miss and were immediately cashed in immediately for a basket.

North Little Rock center Brogan Jones came up with three of those offensive boards in the quarter, on her way to nine points and 10 rebounds on the day.

She also scored six of her points in the third.

Marion was within 14 at the break despite shooting just five of 20 from the field and losing 12 turnovers.

The Lady Pats got five first-quarter points from Tei Boston, but an 8-0 North Little Rock run midway through that frame allowed the Charging Wildcats to stake a 16-9 lead after that quarter.

The visitors would claim their largest lead of the day at 27 points twice in the game’s fourth quarter. The first time came following a pair of free throws by Kyra Collier, who authored five points in the game.

The second time came at 57-30 following an Annayhah Pettus layup.

Marion got a team-high 11 points from Kennedi Boykins, seven from Mya McCray, six from Tei Boston and four from Jakyya Clay.

North Little Rock got a game-high 16 points from Amber Hawkison, and nine apiece from Jones and Yo’Myris Morris.

Marion travels to Mountain Home on Tuesday night for a key 6A-East game. The Lady Pats are currently 1-1 in the 6A-East after beating Searcy, but losing to Jonesboro. Only the top three teams in the 6A-East will advance to the 2016 Class 6A state tournament in Russellville.

Kennedi Boykins (3) gets the ball knocked away against Jonesboro.