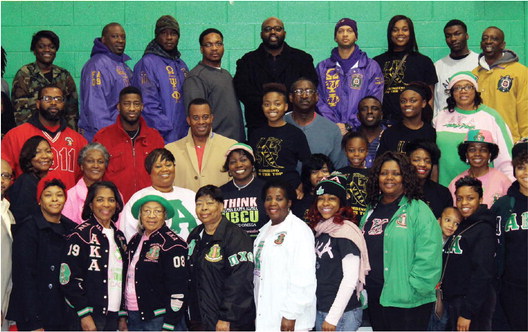 Steve Patterson feels like he has his life back again.

He’s lived with Hepatitis C for over a decade, but thanks to a new drug, he’s not afraid of his own blood any more.

“It worked,” Patterson said. “It’s gone. It cured it.” The former West Memphis resident came forward with his disease and was featured in a 2014 article in The Evening Times in an effort to encourage people with Hep C to seek treatment.

Patterson was a truck driver when he was diagnosed in 2003 with Hepatitis C.

Unfortunately, he didn’t pay it any mind at the time.

“The doctor told me I had it and I was like ‘well, what is that?’” Patterson said.

“He said at some point it would destroy my liver. But I didn’t take it seriously because I didn’t feel bad at the time.”

Hepatitis C is a viral disease mostly transmitted through exchanges of

Praise dancers honor Dr. Martin Luther King through dance at the Wonder Boys & Girls Club. The Single Babies, Pink Hearts and VYAA reached out, strutted and spun choreographed moves to mark the celebration. blood. The disease causes inflammation of the liver which if left untreated can be fatal.

It wasn’t until he started to experience severe fatigue that he knew something was seriously wrong with him.

It got to the point where it became all he could do just to get up every day.

By 2011 he had been to the hospital eight times, died twice on the exam room table, and saw over 20 doctors.

In 2014, Patterson tried Sovaldi, a breakthrough therapy and a substantial improvement over available therapies for treating Hepatitis C virus.

Then he heard about another treatment called Harvoni. Patients on Harvoni require one pill a day and have been cured in as little as eight weeks with no side effects.

“I heard about it and thought ‘maybe this will work for me,’” Patterson said.

Not all insurance will cover the cost for Harvoni. Luckily, his insurance carrier did.

He took the pill once a day every morning for four months and is convinced the drug saved his life.

While he still needs a liver transplant, his latest test in November showed that his body was free of the Hep C virus.

“I noticed that after I got through with the meds that my energy level came back up,” Patterson said. “I felt I was better. I felt the energy come back. I would be in a bad way if it wasn’t for this drug.”

Patterson, who runs a support group for people with Hepatitis C, said he wants everyone who has the disease to know about the drug.

“I want everyone to know that if you have Hepatitis C, there is hope,” Patterson said. “Hepatitis C is very serious. It kills people. If you have it, you need to talk to your doctor and get on this drug. I’m very fortunate. So if I can get this out to the public, we can save lives. That’s what’s important to me — saving the next person’s life.

Patterson said even if a person’s insurance won’t cover the cost for Harvoni, there is a program they can apply to that will provide the treatment at no cost.

“I’ve got my life back and I couldn’t be more grateful.” Patterson said. “And the only way I know how to show my gratitude is to show other people what I had and to help them.”