The West Memphis Public Works Department continues to battle tire dumping in the city. Last month, a new flyer was circulated by city workers, pointing out residents’ responsibilities to have their old tires taken to the County Shop.

The new flyer was posted on the cable access channel, reported in the paper, and hand carried by the city Code Enforcement Officer Mike Antle to wherever the old tires were piling up.

“I think you and Rhonda have done a really good job so far, updating the code citation book, these fliers — it is all really helpful,” said Taylor. “A lot of these problems are just because people really don’t know.”

When new tires are mounted either a tire disposal fee should be paid at the tire store or the tires taken to the tire recycling trailer at the county shop by the vehicle owner. Despite the recent attention to tires given by the city, some residents remain in the dark.

formation to the streets. He took the time to present the flyer at addresses that had tires stacked up. According to Antel many people were hoping the city would pick up the old tires.

“I handed out several flyers,” said Antel. “I talked to people at the doors and they appreciated the information because they did not know what to do with them. They assumed the city would haul the tires off. The information, the warnings, the letters — we’ve got that stuff down pretty good.”

Councilman James Pulliaum said he had reported tire dumping to police twice last month and is working with the police as they investigate.

City Engineer Phillip Sorrell said the county doubled up on tire recycling trailers at the shop on Highway 64. “With just one trailer, it was really tricky, even for the city, being able to take a load of tires out there for disposal,” said Sorrell. “It should get better with two trailers there now.”

West Memphis’ recycling efforts continue to show growth. Residents dropped off 14,770 pounds of recyclables at the city’s bins in December.

The city haul from city hall

This recycle trailer stands ready to receive in the south lot at West Memphis City Hall. Wonder City residents dropped off 14,770 pounds of recyclables in December. 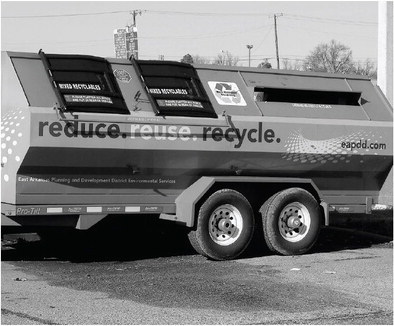